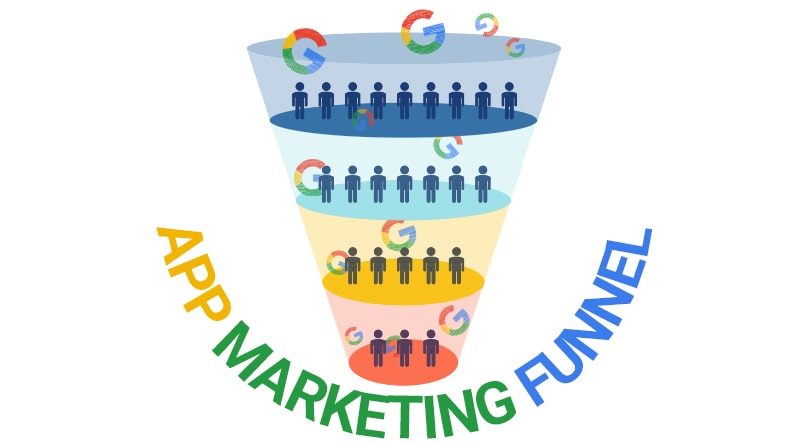 Marketing for a mobile app is a different game than for a website or an Amazon store. One of the best ways to get your app in front of more people and downloaded on more Android and Apple devices is to utilize Google UACs (Universal App Campaigns). Google has built a series of five campaign types that each target different stages of the app marketing funnel, from building awareness to driving installs to engaging active users. To get the most out of your UACs, it is vital to understand each step of the app marketing funnel and how it specifically relates to advertising your app. 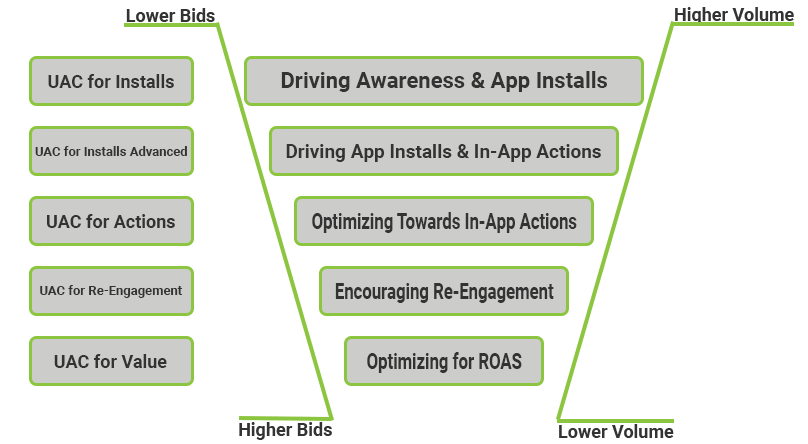 The app funnel begins with the awareness and installs stage and its corresponding Google App Campaign, Universal App for Installs. In this beginning stage, the ultimate goal you are looking to accomplish is to generate exposure for your app while developing a strong foundation of users. Using the UAC for Installs, you instruct Google’s AI to leverage historical auction data to target users that have the highest probability of installing your app after seeing an ad. Being the first step of the app marketing funnel, you are casting the widest net possible, targeting the highest volume at the lowest bids of this entire process. By scaling awareness and installs to this degree, you are reaching every possible high-value user. With that base, you can refine that pool and continue their journey through the following stages of the app marketing funnel.

After you have begun to scale installs for your app, you should start transitioning to the second stage in the app funnel, driving both installs and in-app actions. In this stage, you will transition to using the UAC for Installs Advanced campaign type to begin targeting potential users who are not only likely to install your app, but also likely to complete a specified in-app action afterward (also referred to as an in-app event). Since your primary goal in this stage is still driving overall install volume, you’ll want to focus on driving lower-intent events, such as opening the app for the first time. This will help this campaign type scale properly. If you attempt to target a higher intent/lower funnel actions during this stage, like driving in-app purchases, it becomes much more difficult for Google’s AI to identify potential users likely to download your app and immediately make a purchase. Thus, your UACs will struggle to scale properly.

Once you have successfully built a steady stream of low-intent actions, it’s time to move on to the third stage in the app funnel and focus completely on In-App Actions. In this stage, your first goal is to ramp up your volume of lower intent in-app actions like registering for an account or logging into an account. However, as your campaign continues to drive in-app engagement, you will be able to transition towards higher intent actions like making an in-app purchase. This stage of the funnel aligns with the UAC type called a Universal App Campaign for Actions. This type of Google app campaign UAC still targets potential new users along with the current install base to get as many people as possible to complete a specified action.

With your continually growing audience of users installing your app and beginning to engage, it’s a critical time to implement remarketing initiatives. Luckily, there’s an app campaign for that: UAC for Re-Engagement (currently in beta testing). With this campaign type, you will have the ability to create remarketing audiences based on different stages of the app funnel. For instance, you can target an upper-funnel audience of lapsed users who installed your app, but have not had any recent engagement with it. Taking that a step further, you could target lower-funnel users by creating an audience of users who have lapsed in completing a specific in-app action to target with your remarketing efforts. A user who has stopped making monthly in-app purchases would be exactly the type of user to try to re-engage. The triggers of this UACs’ targeting can range from a user simply not opening the app recently, all the way to stopping their pattern of making specific in-app purchases.

Following your success moving users through the app marketing funnel, you are finally ready to transition to the final stage, Optimizing for ROAS. In this stage, you will be specifically targeting high intent users likely to complete valuable in-app actions at your target return on ad spend (ROAS) using UACs for Value (currently in beta testing). When deciding what valuable means, consider in-app actions like in-app purchases that drive higher revenue. When you have reached this stage in the app funnel, Google’s AI will operate under the narrowest set of constraints, targeting a small pool of expensive, but valuable users likely to complete specified in-app actions. This is all weighed against the predetermined revenue tied to the completion of your campaigns’ in-app event. As the final stage in the app marketing funnel, it is the most detailed and specific stage, designed to focus completely on quality over quantity.

Marketing an app follows the same general principles as marketing anything else, but how to specifically navigate the marketing funnel in the context of promoting an app can become complicated without proper guidance. With the right knowledge, Google UACs will shoulder the weight of this process. Check out the other parts of our UAC series to get a better understanding of what UACs are and how to specifically utilize each type of campaign in conjunction with each phase of the marketing funnel. Taking these concepts and practically applying them to what Google provides with their UACs is a good recipe for success marketing your app.

Where Can I Learn More? 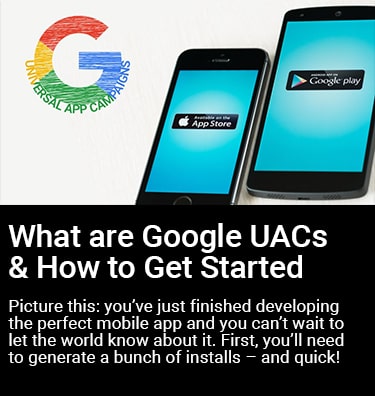 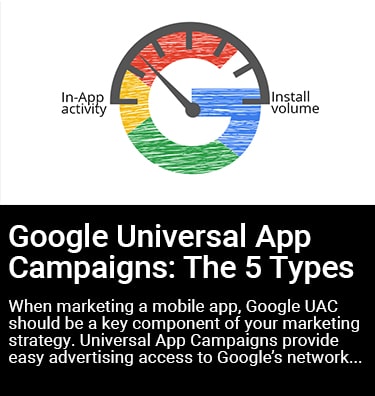 Derek grew up in Pflugerville, Texas and has lived in the area for the majority of his life. He earned his bachelor’s degree in marketing at St. Edward’s University and has been passionate about all things digital marketing ever since. He loves to stay active, workout, read, watch movies, and go on adventures with his wife and their two dogs (Sandy & Sasha).